Republican George W. Bush on Monday will seek to generate a fresh burst of enthusiasm for his brother Jeb Bush’s White House bid in South Carolina, marking the former president’s first appearance on the campaign trail this year.

George W. Bush will appear with his younger brother at a rally in North Charleston, S.C., the Jeb Bush campaign said on Thursday.

The 6 p.m. EST event will be held at the North Charleston Coliseum and Convention Center.

The 69-year-old former president is highly popular in the Republican Party, particularly among South Carolina Republicans, who supported his 2000 and 2004 races for president.

George W. Bush’s decision to go to war in Iraq in 2003 remains a topic of debate in the race to find a successor to President Barack Obama, with Republican front-runner Donald Trump noting that he had opposed the war. 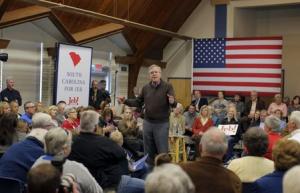 Bush’s image has improved among Americans in the years since he left office in 2009. A CNN/ORC poll last June found that 52 percent of adults had a favorable impression of him, compared with about a third of Americans when he left office.

The Bush campaign believes the ex-president can have a positive impact in South Carolina, which has a sizable number of U.S. military facilities and military veterans who have supported the former commander-in-chief.

It will be the most public role George W. Bush has taken to date in his brother’s campaign.

Jeb Bush, whose father was also president, played down his famous family roots for most of last year in his pursuit of the 2016 Republican presidential nomination, but in need of a boost, he has been relying more heavily on his family ties.

His 90-year-old mother, Barbara Bush, campaigned with him last week in New Hampshire. 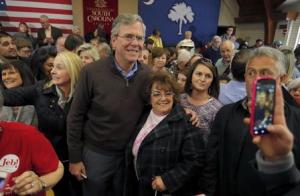 George W. Bush has headlined several private fundraisers for him and reporters were allowed in at one of them, in Houston last October. On Wednesday his voice was heard on a radio ad in South Carolina.

“We need a strong leader with experience, ideas and resolve. There’s no doubt in my mind that Jeb Bush will be a great commander-in-chief for our military,” the former president says in the ad.

Jeb Bush has drawn large crowds during his appearances in South Carolina on Wednesday and Thursday after experiencing something of a comeback with a fourth place finish in New Hampshire.

He has some ground to make up in South Carolina, however, with Trump enjoying a big lead there ahead of the Feb. 20 primary vote.

“President Bush has been incredibly supportive of his brother’s campaign and Governor Bush is excited to have him out on the trail,” said Bush spokeswoman Kristy Campbell.